One hundred years since the first woman was allowed to teach at Göttingen University: Emmy Noether, the Noether School and the Change of Mathematical Thinking

Approaching a scholar biographically – making the individual the focal point – allows for the tracing of an arc across academic developments, personal shaping possibilities, disciplinary interventions, and political change. In my presentation, Emmy Noether’s area of expertise – algebra –, her middle-class Jewish upbringing, her situation as a female scholar, and the changes to Germany’s academic structures following the Nazis’ seizure of power in 1933 all intersect. This captures my methodological approach at the interface of the history of mathematics, theory of science, and gender studies.
Emmy Noether (1882-1935) and the school she formed have contributed substantively to the introduction of new approaches and methodological concepts under the heading of “modern algebra”. Modern algebra here should be understood both as a mathematical discipline and as a holistic perspective on mathematics. Emmy Noether stands for these “methods of working and of thinking” developed in the 1920s and 1930s, which have often been called “abstract” or “axiomatic” and were met with skepticism by contemporaries.
There were never any doubts about Noether's mathematical expertise, yet her biography is one of professional discrimination, marginalization within her discipline, and late fame. How, under these circumstances, did Noether succeed in forming a school and effectually change mathematical ways of thinking? I will give a summary of Emmy Noether’s biography, an introduction to her way of thinking, and a short overview of the Noether School in its personal, spatial, and temporal dimensions. Concluding remarks show the breadth of the influence of the Noether School in changing the mathematical way of thinking, which can be captured by the words “modernization” and “algebraization”.

In the talk I’ll elaborate on all aspects that made her my role model - personally and professionally. 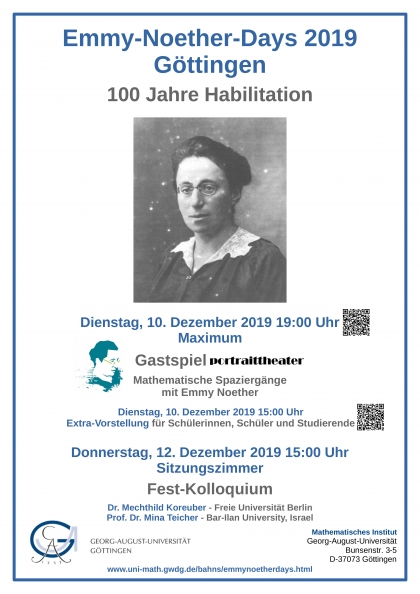